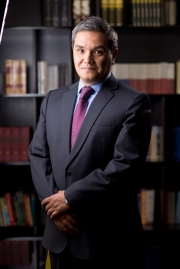 He obtained his Law Degree from the Universidad de Lima, with specialization studies in Competition Law and Advertising and Telecommunications Law from the Private University of Applied Sciences (UPC). He joined ONTIER in March 2018. Before ONTIER, he was a Senior Partner at CPB Abogados from 1999 to January 2018. His professional practice and experience focuses on Public Law and regulation, Competition Law and of IP Law.